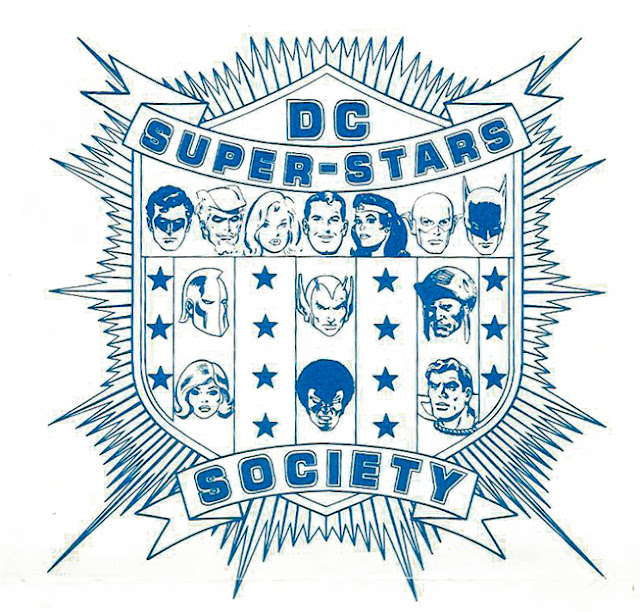 It was a poorly-designed house advertisement that ran in DC Comics’ December 1977 issues. Looking like a statement of ownership and more than a major announcement, the memo-style document outlined the formation of The DC Super-Stars Society fan club, in type so small you could forgive readers for accidentally ignoring it.
But if they took a second look, their hearts would have surely skipped a beat, as did mine, when the fine print was fully digested. DC Comics were offering an avalanche of goodies for fans, and best of all, so it seemed, designed specifically for their characters of choice. Four months later, the ad was repeated in various titles, but in bigger type, perhaps to ensure that this time, readers took more notice.

The ad mysteriously asked for applications for 12 chapters of the Society, of which the Legion was one.  After sending in an expression of interest, readers received detailed application forms for each chapter they asked for. I duly posted self-addressed envelopes for all of the chapters save the Battle Stars (later renamed War Heroes) one, because like most fans, I was only keen on the super-powered heroes.


Each application form consisted of the same format: four pages comprising an introductory page, a quiz page, another outlining what the membership kit contained, and then  the actual application coupon, which fans had to fill in and return along with payment of $4 for each kit.
Promised with the packs were a DC cloth patch; a glossy DC Super-Stars Society insignia decal in color; an insignia transfer for a t-shirt; a membership certificate; a membership card; discount coupons for comics and merchandise; and best of all, a huge color poster of DC’s Super Stars, which I just had to get because, surely, it would include some Legion members. 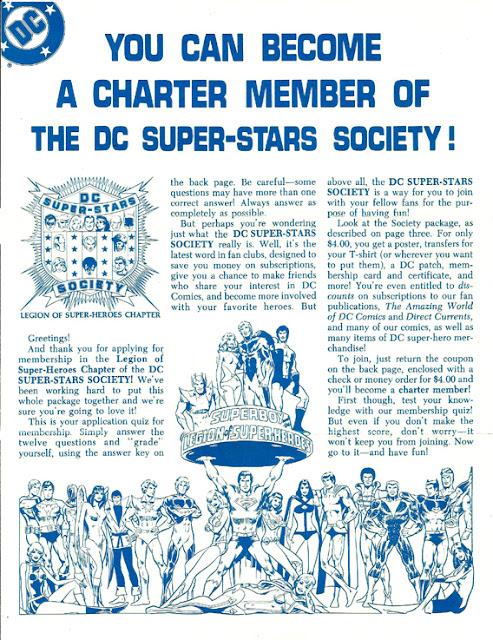 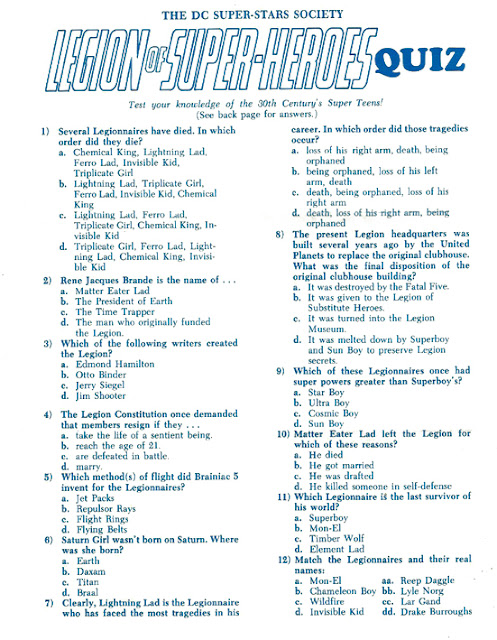 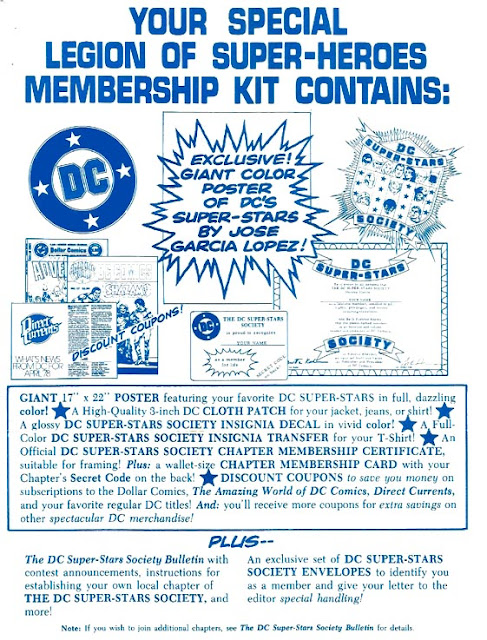 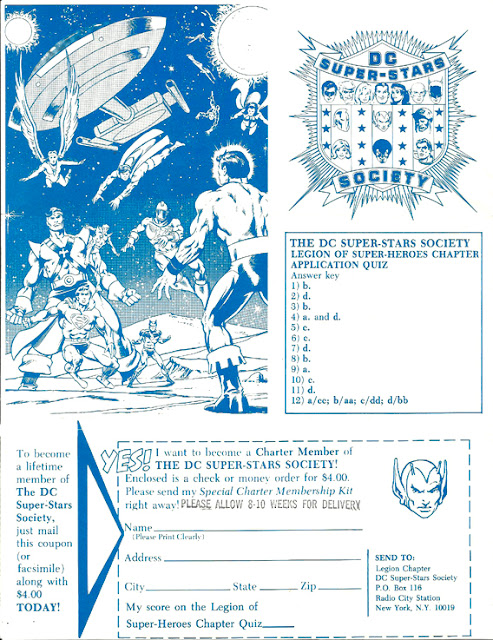 The Legion kit was the only one I ended up sending away for. It was just as well, because as history has recorded, a series of unfortunate events forced DC’s planned expansion of 1978 to  spectacularly implode upon itself, resulting in a reduced number of titles, loss of jobs, severe economic cutbacks, and termination of various projects, including the Super-Stars Society. I never got my $4 refunded; had I applied for all the other kits, I could have lost $44, a lot of money at the time, when comics only cost 40-60c each.
But DC did send me a copy of the poster, if not the entire kit, maybe as recompense for the collapse of the club, but possibly also because DC wanted to keep the loyalty of their subscribers, of which I was one. In any case, I loved the poster, not just for the gorgeous Jose Garcia-Lopez art, but also because it did, as I had hoped, feature some Legionnaires! My only complaint was that it came flat-folded into quarters, so it showed ugly crease lines.


Apart from the membership card which would have printed the chapter the fan had applied for, all the other paraphernalia, including promised regular updates and bulletins, were essentially the same for all chapters. In effect, someone who had applied to join multiple chapters would  simply receive the same items each time, and would have every right to feel aggrieved.

Two years later, after a period of consolidation, DC felt on safe enough ground to launch a similar project: the Superman Club, fashioned after the club of 1960, and offering pretty much the same items – a full color envelope, a gold foil charter member sticker, secret code, and membership certificate, among others.  But this time they once again threw in the same Garcia-Lopez poster, presumably because they had so many leftover copies from the axing of the Super-Stars Society club. 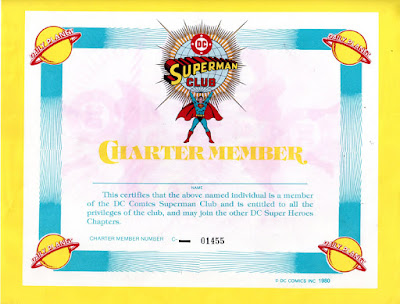 The Superman club didn’t last for very long; it folded in 1982, after sending out four updates. Perhaps the best deal it offered was a saving on the Superman phone ($124 instead of $149)!

The Garcia-Lopez poster remains a sought-after collectible by Legion fans today. There have been facsimiles of the poster offered for sale via ebay, but they are easily identifiable because they’re smaller, and also clearly show up as digital scans of the original, crease-lined item. You will not find a copy of the original poster without fold marks because of the way it was packed flat for mailing purposes .. obviously no-one at DC had thought of using tubes.

The art for the poster was later repurposed for a Super-Powers advertisement, and is not difficult to find. It offers an easier and cheaper way of obtaining this gorgeous piece than having to wait around for the original to appear somewhere, and then having to bid a high price for it. However, note that in this poster, Cosmic Boy's costume is cleverly re-colored to resemble his current outfit at the time.

For me, the item I want most from the ill-fated Super-Stars Society is actually the glossy insignia that was part of the deal. The one shown at the top of the blog is reproduced from the application kit. It is particularly significant for Legion fans because Chameleon Boy features right in the middle of it.  I have never seen the fully-colored version that was promised to members, and I wonder if any exist today. Naturally, if you find one, I will be most happy to hear from you!