Legion fans know Alex Ross created an absolute masterpiece with his wall poster depiction of Superboy and the Legion of Super-Heroes. It was produced in 1997 as a huge 29” x 54” Giclee print for the Warner Bros Studio Store Gallery, with a run of only 500. The image is used as part of the background for this blog. 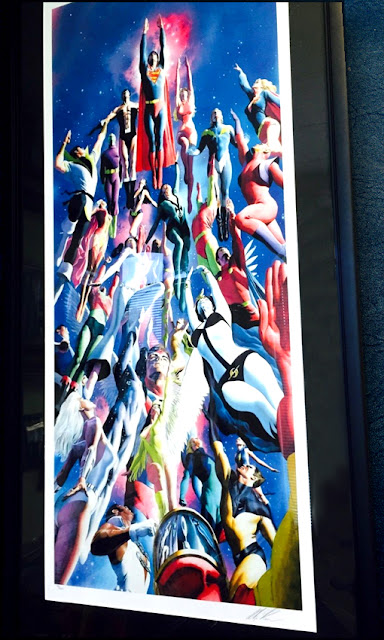 In a recent interview, Alex included the creation as one of his 10 favorite pieces. In his own words: “This print is a portrait of Superboy and the Legion of Superheroes, which was a major part of my childhood in the version that existed in the '70s. It’s a tall, vertical piece that has a very bright blue background and vivid colors for all the various members. They’re flying in unison, up towards the top of the piece, following Superboy.
“This was a careful drawing meant to evoke the style of the artist that worked on it in the early '70s: they went through a kinda sexy costume phase, where there were lots of bikini superhero costumes for the women and even some of the men as well. But it has a certain timeless quality that means something to me, and it’s one of the pieces I’ve kept all these years. This was never a cover; I did it purely as a print for the Warner Bros Studio Stores, way back in the late '90s."
The artist Alex refers to is more likely Mike Grell than David Cockrum, and Alex would later use one of Grell’s layouts again as a template for another of his well-known Legion pieces (this time for Back Issue magazine).

The 1997 print was more than just a tribute to the 70s Legion. The clever vertical layout, which accentuated the upward movement of Legionnaires reaching for the stars, was clearly one of Alex’s most inspired creations, from the grandiosity of Superboy and heroic postures of the members, down to the minute details of Chemical King and the Legion cruiser reflected in Wildfire’s visor. The scene comprised the Legion membership just prior to Chemical King’s death, shortly after Dawnstar joined the ranks.
The print came with a certificate of authenticity, a key to the characters, and an instruction sheet on taking care of the item, packed in a plastic bag taped to the backing board. The black frame itself, with clear acrylic face plate, is not of the best quality and is prone to cracks and general wear and tear, forcing some owners to re-frame the print.

The illustration has been available in many other forms throughout the years, often as smaller reproductions in various books (including some of Alex’s own biographies), calendars and postcards, and has been offered as inferior quality facsimiles (often with the bottom of the image cropped off) by enterprising merchants eager to make a quick buck.
For fans who have never seen the documentation that came with the Giclee, here’s what they looked like:


The print went on sale for $575, which sounds like a big investment even today, but imagine what it seemed like 18 years ago. Yet with only 500 copies made, shrewd collectors (or at least those who could afford it) recognized the value of the item, and quickly snapped it up, making it an instant sell-out. Today, not only will these prints likely cost more than $1000 each, but you’d be lucky to even find any being offered. And when Alex finally decides to sell the original, imagine what that would fetch.