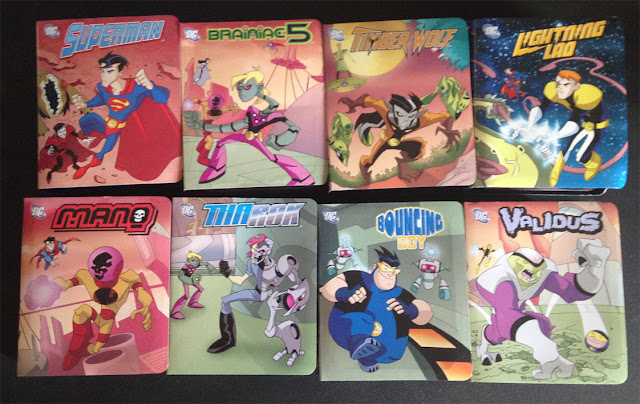 McDonalds have produced numerous licensed toys since they launched their Happy Meals in 1979, and Legion fans were delighted when a set of figures commemorating the Legion animated TV show was released in 2007.
In total, eight characters were featured: Superman, Brainiac 5, Timber Wolf, Bouncing Boy, Lightning Lad, Mano, Tharok and Validus. Each came within a book-shaped case that you could open to reveal the figure embedded within a small diorama blister on one side, and a trading card in the other. The figures are non-poseable and cannot stand on their own.

The series was released jointly with a Build-a-Bear set, the cause of much anger among Legion collectors. Not only was the Legion linked to a franchise it had nothing to do with, but the clear message sent out by McDonald’s was that the bear toys were targeted at girls, while the Legion set was aimed at the boys … hence the lack of any female characters (Saturn Girl and Emerald Empress the most notable absentees).
You could purchase a Happy Meals box at the time which featured both the Legion and the bears on the outside. The Legion component featured a punch-out figure of Superman, an Interlac code game, and a figure of Mano in which kids could punch out holes with their toy to “defeat” the villain. While the action figures themselves are still easy to obtain via sites like eBay, the actual box in good-or-better condition is harder to come by due to its fragility.


A sought-after collectible tied in with this release was the promotional stand that featured the full set of bear figures at the top, and the full set of Legion cases at the bottom. They were used at many McDonald’s outlets at the time of the release. There was also a window poster featuring the Legion and the bears on one side, and McDonald’s “Good food to grow” on the other, which depicted a milk shake, a juice, a fruit cup and some nuggets. No burgers!
I got lucky when I went seeking to acquire this display stand. After inquiring at a couple of stores as to whether I could have one after the release ended, I was given an unopened flatpack consisting of the various items: the stand, the figures, the poster, plus instructions on how to put them together.

A variation of the poster was used for the menu board of the drive-thru, while an illustration of the toys available was mounted on a plastic sheet with plastic brackets for external use.


Today, my copy of the main poster is stuck on the back of the door of my Legion shrine room, while the stand is displayed on a counter top. I still get annoyed every time I look at the Build-a-Bears bit, though. Maybe I can get someone to make Legion outfits for each doll. It’s been done before!