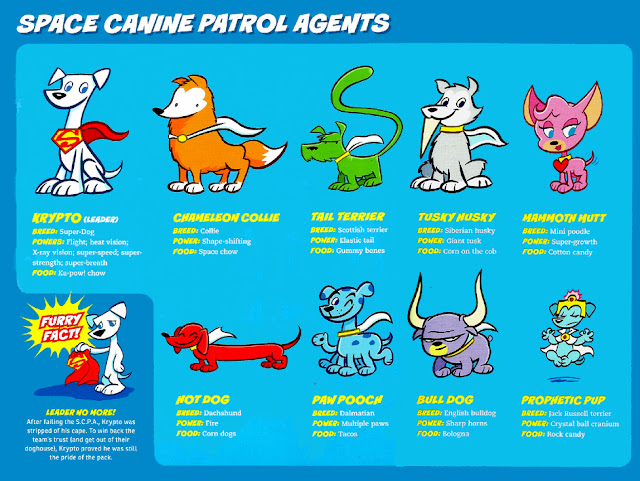 Back in the days when Mort Weisinger absurdity pervaded the pages of the Superman family of books, the Space Canine Patrol Agents were created as the canine equivalent of the Legion of Super-Heroes.
First appearing in SUPERBOY # 131, the group consisted of several members who had clear Legion analogues and possessed similar alliterative names:

Mammoth Mutt (Bouncing Boy): He could inflate to many times his size.
Hot Dog (Sun Boy): As befits his name, this was a weiner-shaped Dachsund who had heat powers.
Chameleon Collie (Chameleon Boy): A shapeshifting Collie.
Prophetic Pup (Dream Girl): A female with precognitive powers.

Other members included:
Tusky Husky: He could extend one of his canine teeth into a long tusk.
Bull Dog: Like a bull, he could grow horns.
Paw Pooch: This canine had the ability to grow as many extra limbs as he wanted.
Tail Terrier: He had an elongated tail he could use as a whip or lasso. He was the leader of the group at the time Krypto joined, and was also known as Top Dog.


Unlike the Legion, the canine conglomerate was based in the present. The stories were not without some of the sense of drama and pathos that characterized many Legion tales of the time. Mammoth Mutt, for example, was killed in the line of duty, only to be replaced by his girlfriend who had the same powers, Mammoth Miss. Another member who sacrificed his life was Beam Beagle, who possessed searchlight vision.

Like the Legion, who was inspired by Superboy, the SCPA was often led by Krypto, Superboy’s pet. In the first appearance of the SCPA, Krypton adopted the guise of a flying dog named Air Dale, as the group battled the Canine Caper Gang. And of course, the members (and associated allies and villains) all could communicate with each other in their very own language, but the speech was translated into English for the reader to easily  comprehend.
Other villains the group confronted were the notorious Phanty Cats, feline pets of Phantom Zone villains; and the evil Cat Crime Club. But not all purry personalities were on the wrong side of the law: there was also the Space Cat Patrol Agents, a crimefighting group whose members included Crab Tabby (super claws), Atomic Tom (nuclear powers) and Power Puss (lightning vision).
The SCPA, whose headquarters is shaped like a doghouse, also boats a rallying battle cry they proclaim each time they meet : “Big dog, big dog, bow wow wow! We’ll fight evil, now, now now!”. (Big Dog is the name of a constellation.)

The SCPA only appeared in three issues of Superboy in the 60s, and the stories are fondly remembered for their utter silliness. The Phanty Cats notion is ridiculous enough, but we also observe that the SCPA members initially went about their duties in the nude, often fighting upright-walking canine and feline villains who all had a sense of decorum and wore clothes. Krypto, meanwhile, in an attempt to disguise himself, once donned a pair of Clark Kent glasses he just happened to keep in his cape. And on another instance, Krypto was summoned to a meeting to help the group raise funds because it was "Help-A-Dog-Agent Week".
With the dawn of the 70s and a more “relevant” theme to comics, the SCPA faded into obscurity. They never featured again in a DC Comics story, but did appear in ANIMAL MAN #25 (Deus ex Machina, 2003), where they were in superhero limbo, a place where DC characters written out of continuity reside. It was a sad cameo, with the members shown grizzling at each other and scrapping like angry dogs.
In 2014, an issue of SANDMAN OVERTURE (#3) featured a cameo of a version of the SCPA, named the Space Canine Patrol Corps, but little else was shown about them.


The group was given a revamp in the Krypto the Superdog television animated series, but the name was changed to the Dog Star Patrol. The membership was essentially the same, consisting of comic book regulars Tail Terrier Mammoth Mutt, Hot Dog, Tusky Husky, Paw Pooch and Bull Dog. In the series, the team was led by Brainy Barker, a female who possessed powerful psychic abilities, and rode on a pillow instead of walking. They operated out of a floating satellite shaped like a fire hydrant, a less-than-funny doggy joke.

One notable character introduced in the TV series was Drooly, who had the power of super-drooling, able to create streams of saliva, using it as projectiles or as rope. He was made a reserve member, as was second season debutant Stretch-o-Mutt, who could contort his body like a canine Plastic Man, and ostensibly included for comic relief, being a Gomer Pyle-esque member of a military guard dog patrol.

In the series, Krypto often guest-starred with Streaky the Supercat and Ace the Bathound against recurring villain Mechanikat, and the two allies were later made honorary DSP members.
The series was promoted heavily in various forms of merchandise, including jigsaw puzzles, coloring books, posters, a line of Fisher-Price toys, a series of Scholastic books, and a six-issue series from DC Comics. Some of the TV episodes were also released as DVDs.

The Scholastic books were part of the DC Super-Pets line and featured original stories of the Dog Star Corps, bringing back characters such as the Phanty Cats and the Cat Crime Club. One of the stories, the Amazing Mini-Mutts, introduced Corp cadets, who included Pound Paulie, Pyro Poodle, Husky the Hurler, and two miniature canines named Luna Moon and Sprightly Steve, the latter two admitted as members after helping the group defeat Brainikat (a feline version of Brainiac). 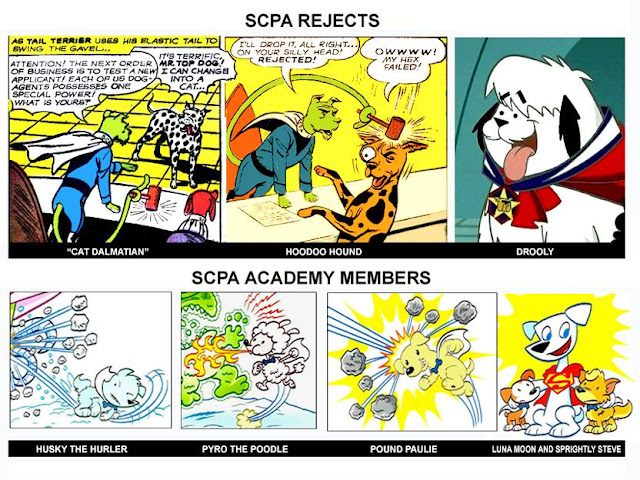 The Super-Pets line was a concept of artist Art Baltazar, most well-known for his Tiny Titans books. He produced an Encyclopedia of Super-Pets which not only featured the Dog Stars, but also pets of the major DC characters, including some Legionnaires! 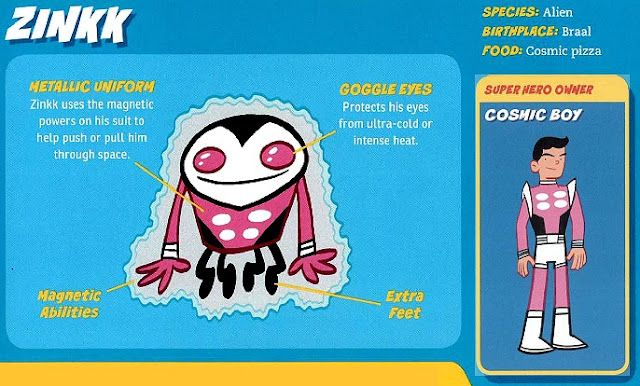 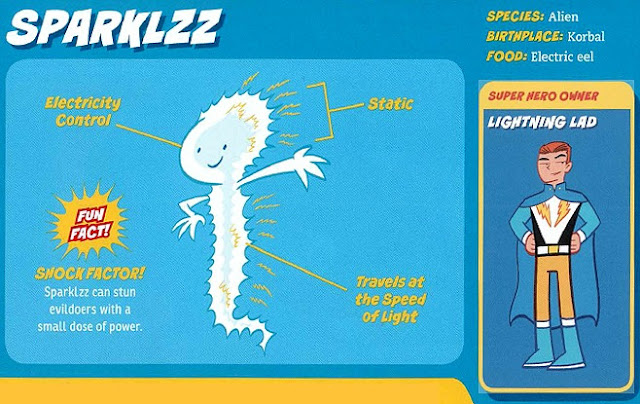 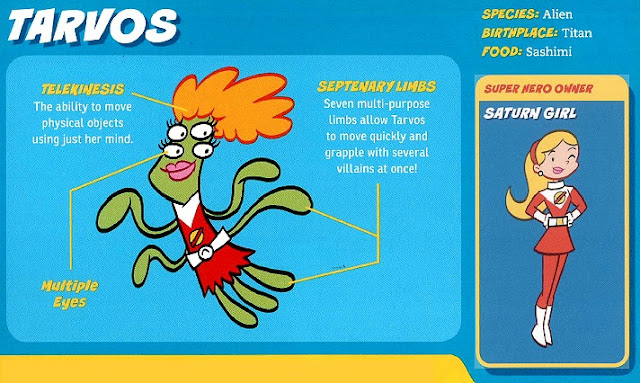 Postscript: In 1990, Kitchen Sink produced a two-issue series examining what it felt were the top 10 worst comics of the past 25 years. The SCPA were contenders for worst group and featured over a couple of pages, but they didn’t make the cut. While the concept of humanoid cats and dogs was indeed ludicrous, it was also entertaining in a campy 60’s Batman fashion. To have the SCPA in the list would have been a travesty. 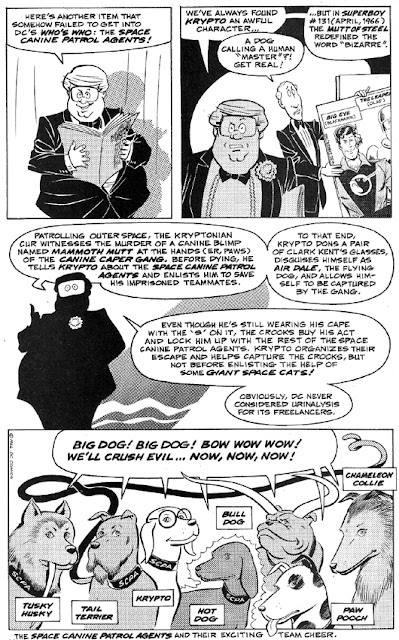 THE LOVE RUNNETH OVER FOR CUPS

The hero-themed slurpee cups issued by the 7-11 chain in the 70s remain prized collectibles by comic fans, including those of us who follow the Legion.
There were four major releases: a 1973 DC comics set, two 1975 Marvel comics sets, and a 1977 Marvel comics set. The 1973 and 1975 cups use images of each character on the front, often with the logo from their comic book. On the other side of each vessel was a summary of the character’s origin, powers, and supporting characters.
The DC collection comprised 60 cups, mostly heroes but with nine villains. Made from plastic, the cups were easily worn from constant use, and the images tended to fade with each wash, making it difficult to find copies in excellent condition … unless, of course, you bought them when they first came out and kept them only for display purposes. 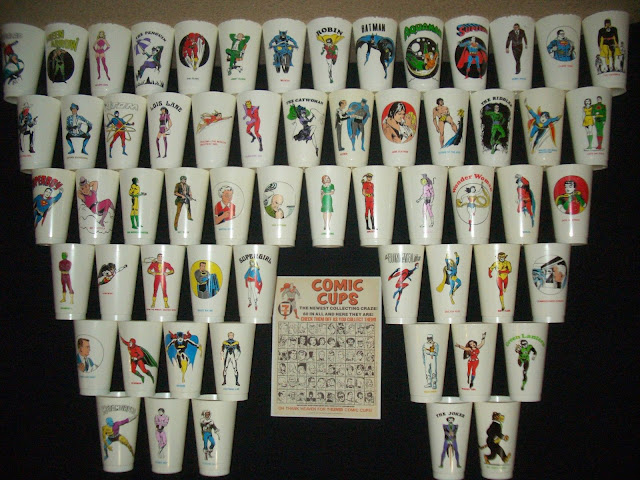 The Legion characters featured on the cups were Mon-El, Brainiac 5, Chameleon Boy, Saturn Girl, Cosmic Boy, and Lightning Lad. The images used were fairly recent at the time, being drawn by hot new artist Dave Cockrum, who also designed many of the Legionnaires’ new costumes. By contrast, the pictures used for other DC characters were often stock images used in an earlier decade.

If Legion fans wanted to be more completist, they also collected cups which featured Superboy, Supergirl, and honorary members Jimmy Olsen and Lana Lang, although neither were shown in their super-hero guises. You could also go one step further and collect the Brainiac cup, which depicted the villain and his pet monkey Koko, who was later to become a pet of the threeboot’s Brainiac 5.

There was also a checklist of all the cups to enable collectors to keep track of the items, and this in itself is a collectible for Legion fans because of the images used in the document. 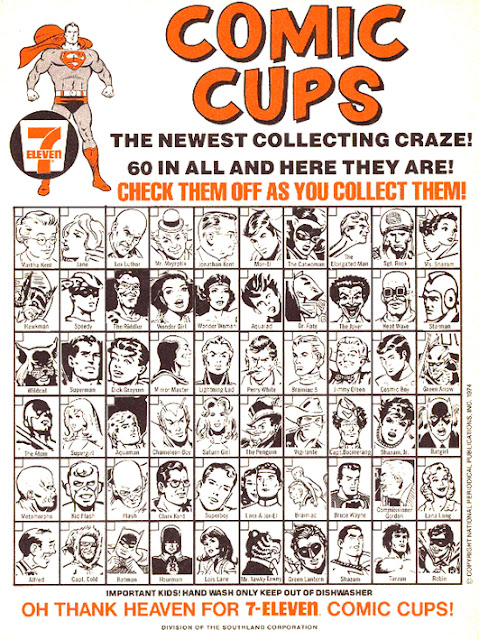