Back in the pre-Internet dark days, comic fans got their dose of industry news by subscribing to or buying magazines devoted to their hobby. Today's blog continues our look at the various publications which featured content about the Legion of Super-Heroes.

COMICS FEATURE 1 (1980)
Published by New Media, this magazine promised in-depth interviews, news exclusives, comprehensive articles, expert columnists, analysis, previews “and much more”. The somewhat amateurish layouts reflect the technology of the time, when magazines were far less sophisticated in design than those published a decade later. The back page of the first issue is a good example of this, with covers of two Legion comics pasted on a stark white background, comparing the the group “then and now”.

The back cover alluded to an article inside the magazine, which reflected on how the Legion had changed over time, written by LEGION OUTPOST founder Mike Flynn. He makes an astute observation: the Legion had changed from nothing more than a teenage club in its formative years to an actual law-enforcing organisation recognized throughout the universe.
Flynn asserts that the great strength of the Legion is is built-in conceptual appeal, with no limits to what writers can do with the team. The article is embellished with illustrations garnered from the Legion APA of the time, Interlac (which, incidentally, still exists).

COMICS FEATURE 15 (1981)
The cover, featuring new artwork by Chuck Patton, promised a “Big Legion extravaganza” … and it lived up to the claim.
Kicking off the series of articles was an interview with Paul Levitz, in which he discussed his plans for the Legion on his return to the writing chores. He believed no artist ever willingly wanted to draw the Legion because there were so many characters. “If you invented a special Legion page rate, it wouldn't cure anything anyhow, because the book's still a pain. Good artists enjoy being creative; they don't want to spend their time figuring out how to do one-footed, three-armed people with antennae who live on a planet of tightropes, suspended over water.”

*Curiously, there is no shortage of current skilled artists who would give anything to draw the Legion in a regular series.*

A rundown on each of Paul's stories in his current run followed, starting with an analysis of SUPERBOY 225, in which Wildfire was elected leader and minor characters like Dream Girl and Shadow Lass started getting prominence, and ending with the Christmas story of DC SUPER-STARS HOLIDAY SPECIAL.

To wrap things up, Murray Ward delivers a good analysis of the “Legion team spirit”, looking at the group's evolution through ADVENTURE COMICS, ACTION COMICS and eventually into its own title. There's a membership roster of the Legion and its affiliated groups.

COMICS FEATURE 47 (1986)
This issue features the first part of a rather mediocre article on the “complete hero history of the Legion”, which once again goes through the motions of describing the group's genesis and includes appearances and cameos of the group or some of its members in other titles. 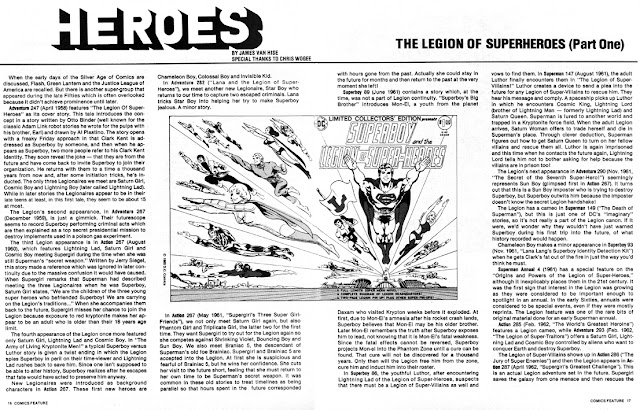 COMICS FEATURE 48 (1986)
The rundown on the Legion concludes in this issue, and takes readers up to the Baxter issues, the reprint book, and the SECRETS mini-series. Again, there's little new here that hadn't been already written about in other magazines or, indeed, in earlier issues of this same publication … but, hey, any publicity is good publicity.
The article ends with the claim that the Legion remains the longest-running science fiction strip in comic books. One wonders if the same can be said today. 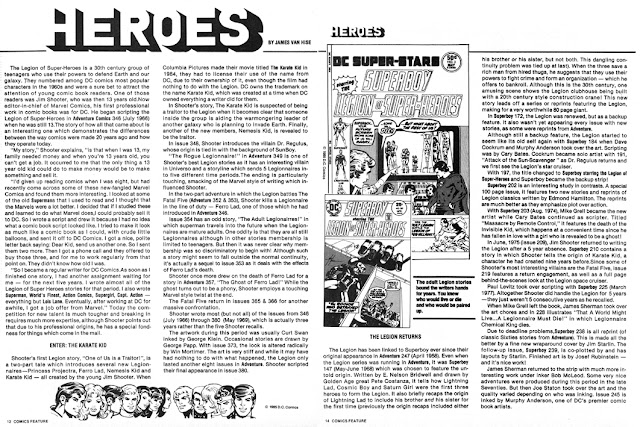 COMICS INTERVIEW 16 (1984)
It's 1984 and the Legion was hot property. They had different stories appearing in a Baxter series and a newsprint version, so fans really had a double dose of the Legion each month.
This issue kicked off its Legion coverage with a chat with Paul Levitz, who has probably given more interviews about the Legion than any other creator, Jim Shooter included. Paul starts by describing his role as vice-president of operations at DC Comics and various aspects of the company's operation, before talking about the Legion, his favorite comic book from childhood.
“I can't keep track of where all the characters are at any given time. So a lot of the plotting is on little charts, along with the sub-plots and how they're evolving and where I have left the characters. Maybe there's somebody out there who keep all this in their heads, but I sure can't.” 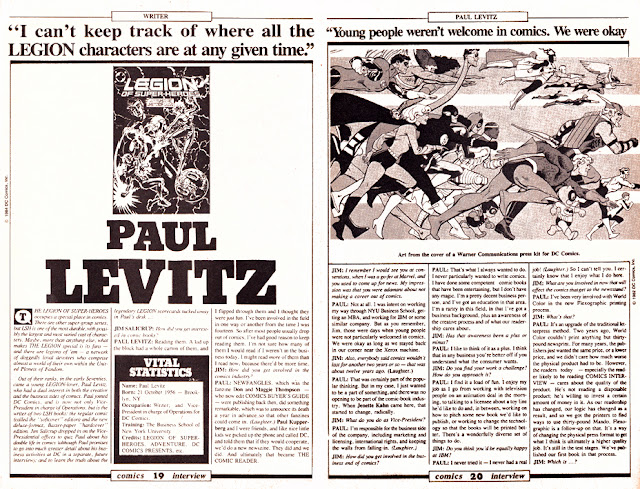 And what was he reason for the Legion's appeal? “Part of it is the sheer number of characters. There's enough diversity in it that everyone can see something in it that they want to see. Part of it the fantasy of the future. The book has always had a feeling of its own that sets it apart from the rest of the marketplace.”
Accompanying the Levitz interview was another with budding artist Dan Jurgens, regular penciller on the TALES OF THE LEGION book. The artist, who also supplied an original piece for the magazine's cover, had just come off the Sun Devils title, and was thrilled to walk straight into the Legion title, having been a long-time fan of the group.


Jurgens talks about his history and aspirations, both for the Legion and his own career. Interestingly, he said “My goals have been changing a lot since I entered the business. I would like to wite more.” It's fair to say that in this regard, he made the transition successfully.

COMICS SCENE 4 (1982)
There's our man Flynn again! The Legion fan club founder contributes a piece on the pendulum of Legion fandom and its oscillations throughout history.
The entertaining read provides details of his love for the Legion, the genesis of the fan club, creating the LEGION OUTPOST, meeting with fans from all over the country, getting a surprise visit from Jim Shooter, and the explosion of Legion APAs at the time. Flynn also remarks on the belief that readers either “get” the Legion, or they don't, with Marv Wolfman joining the main APA Interlac simply to ask members what the fascination was.

Flynn rightly points out that Legion fans will follow the group through thick and thin, irrespective of what they think of the creators at any said time. “I will not stop being a Legion fan, even if Don Heck writes the book and Murray Boltinoff draws it.” 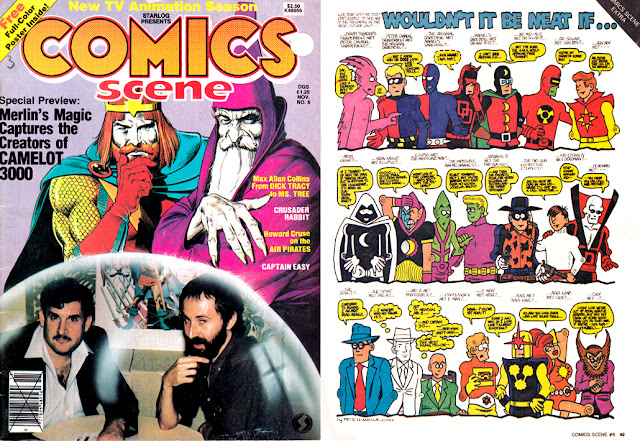 COMICS SCENE 6 (1982)
No real Legion content here, but there's a nice full-page colored gag page by Fred Hembeck which includes Sun Boy and Brainiac 5. Hey, we all love Hembeck, right? If you want to stretch the Legion connection slightly more tenuously, there's also a photo of Dave Cockrum at a convention.


COMICS SCENE 2 (1988)
Skip forward six years, and we're onto the second incarnation of this magazine, now published quarterly instead of monthly. The magazine devotes pages to an article on “30 years in the 30th century”, and once again Paul Levitz, already seven years into the Legion scripting chores, has been roped in to detail three decades of out futuristic heroes, and also his plans for the series. 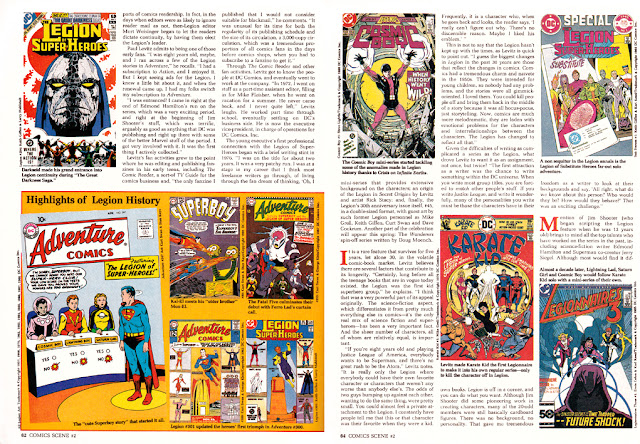 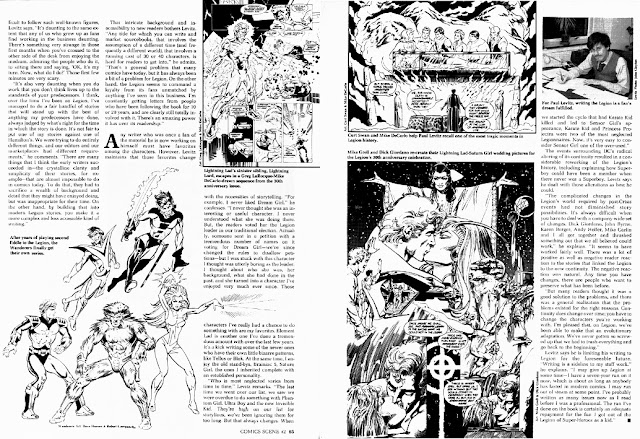 Levitz talks about fan reaction shaping his stories. “I never thought Dream Girl was an interesting character,” he says. “But the readers voted her leader in our traditional election. I thought about who she was, her background, what she had done in the past, and she turned into a character I've enjoyed very much ever since.”
“Element Lad is another I've done a tremendous amount with over the years. It's a kick writing some of the newer ones who have their own little bizarre patterns, like Tellus or Blok.”


COMICS SCENE 32 (1993)
The new Legionnaires are featured in this issue, with each of the members spotlighted inside, featuring glorious art by Chris Sprouse, who also created the cover piece. The Legionnaire illos are worth the price of admission themselves, marking the first time the younger kids have been shown in their costumes,
Writers Tom and Mary Bierbaum explain their plans for the series, including a bit of detail on the new characters Catspaw, Dragonmage and Computo. “The primary goal is not to recapture the old fans, but the new readers who've never read Legion before,” Tom says.
The article also gave readers a sneak preview into an upcoming battle with a rejuvenated Fatal Five. 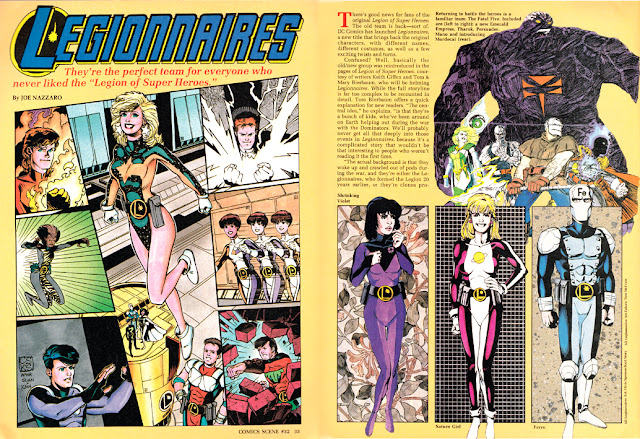 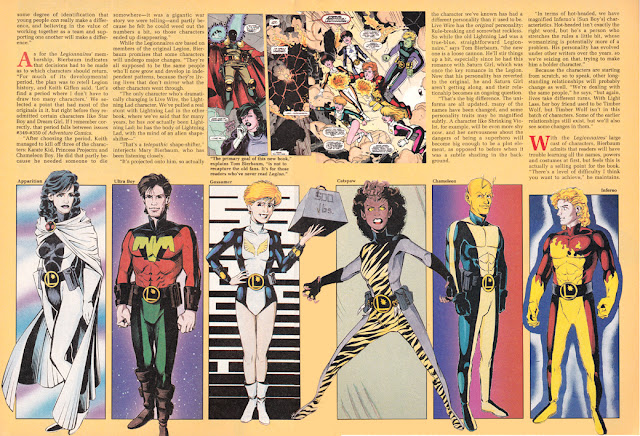 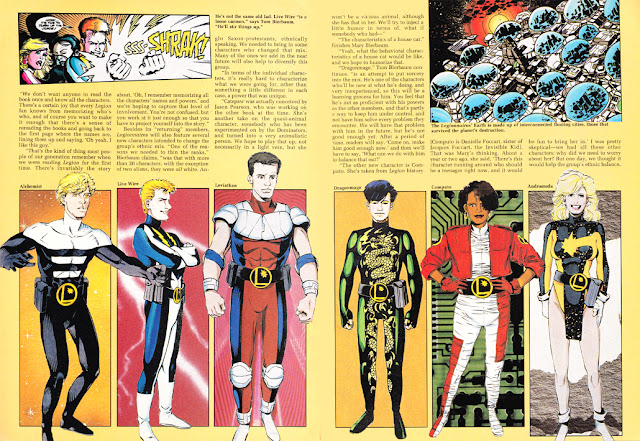 They also point out their hope to create the most “all-out” Legion story they can, with the story arc that began in LEGION #43, culminating in the “Bride of Mordru”. Part of this saga involved the dark lord resurrecting all the Legion members who had previously died.


That wraps up our look at the comic magazine articles on the Legion this time. The publications are reviewed alphabetically, and we're still only at "C"!  Join us next time for another look into the paper previews of our favorite futuristic team.