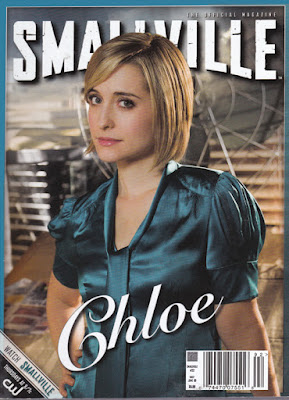 SMALLVILLE 32 (2009)
This was a glossy product published in London by Titan Magazines, and devoted to the CW television series of the same name.
As fans know, the show's version of the Legion debuted in Season 8, along with the Persuader and shortly after, Brainiac 5. Booster Gold and Supergirl also made appearances.
This issue featured extensive articles with the actors who portrayed the Legionnaires, as well as episode writer Geoff Johns, who of course handled the Legion in the comic book as well.
Actors Calum Worthy (Lightning Lad), Alexz Johnson (Saturn Girl) and Ryan Kennedy (Cosmic Boy) all profess to being fans of the show, as well as having passing knowledge of the Superman comics, if not the Legion. And they certainly did their homework before getting to work.
Calum: “I knew about the Legion before I booked the role. The fans were the most amazing source. It also helps having head writer Geoff Johns on the set, because he really knows the Legion and exactly what he wanted.”
Ryan: “I went out and bought all the Cosmic Boy and Legion comic books. I saw a bunch of variations of the group, and some very unfortunate costumes! I researched a lot online and read a lot about Cosmic Boy's past.”
Alexz: “Ryan had tons of comics books and it was cool just seeing how incredible the drawings were. Our first scene is taken directly from some of the comics the Legion is in. It gave me a visual idea of how to portray Imra.” 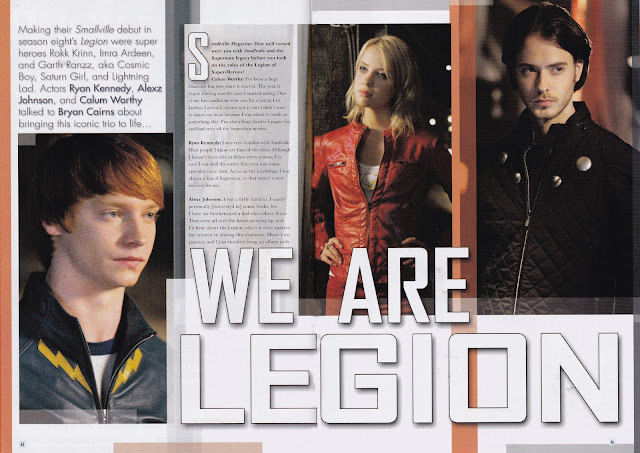 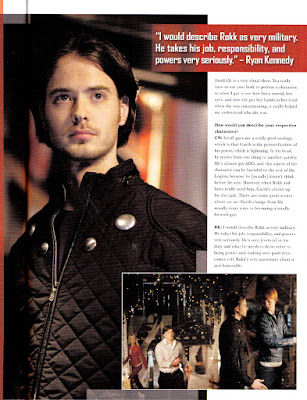 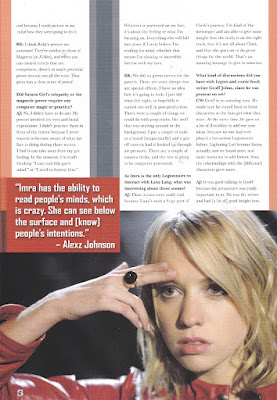 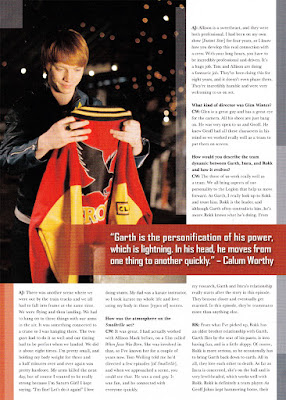 The actors describe what they feel their respective characters are like, and also the first meeting with Superboy. 'It's like meeting Elvis. Going back in time to meet someone who's a big influence on popular culture,” Calum says.
Geoff Johns explains his participation came about after discussions with former Smallville producer Jeph Loeb, with Geoff pitching the concept of introducing the Legion.
Geoff also believes the Persuader is “one of the greatest villains in the Legion pantheon”. “He looks cool and I thought he'd translate well on the screen” he said. “He's a fantastic character with this atomic axe that can cut through anything – even time itself.” 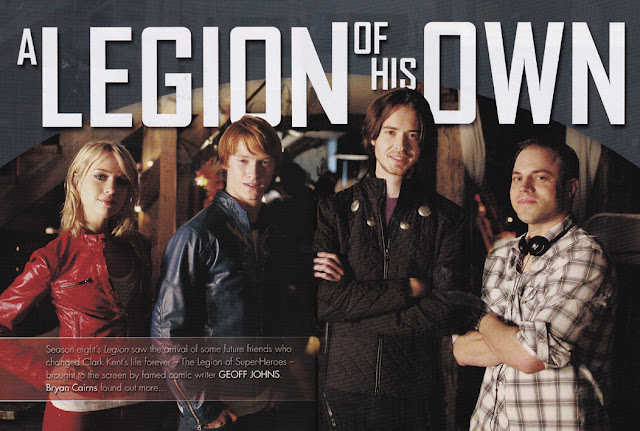 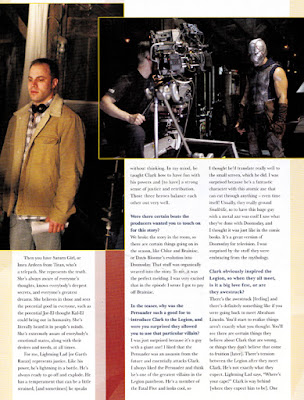 Was Geoff tempted to put the Legionnaires in their traditional costumes?
“They're very down-to-earth and not Spandex,” Geoff said. “They're normal clothes with the colors and the symbols of the Legion. I'm really happy how they turned out.” 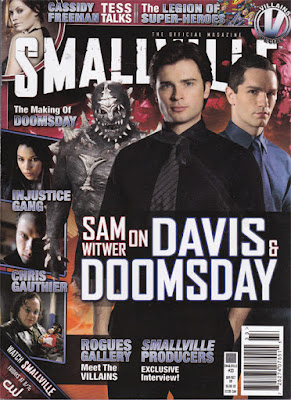 SMALLVILE 33 (2009)
Following on from the Legion profiles of the previous issue, the magazine this time focuses on the history of the Legion, in a segment named From Strip to Screen.
The article looks at the Legion from its first appearance, the early years, and growing to adulthood, with images of the group drawn from various comics. The reboots are covered, right up the “modern Legion”. 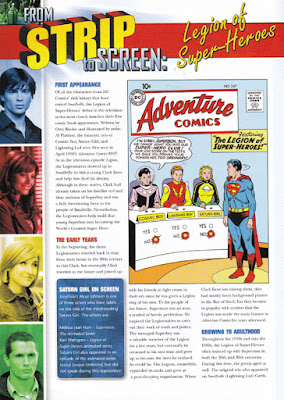 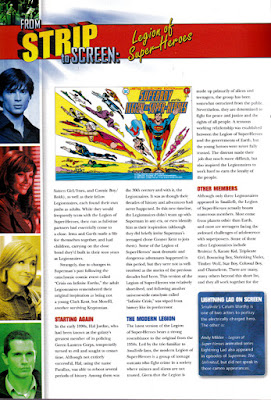 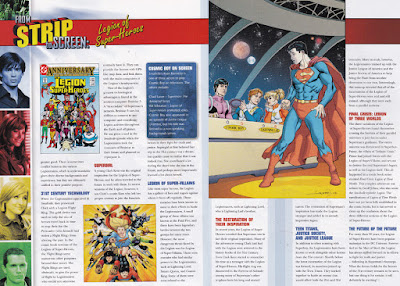 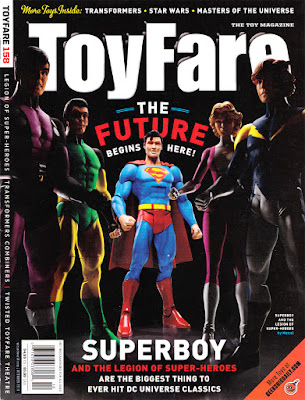 The Mattel 12-pack takes center stage in this issue, with senior brand analyst Scott Meitlich and project designer Bill Benecke being interviewed.
They reveal there was an initial working list of 22 characters which they had to whittle down to an even dozen.
Benecke: “We wanted to celebrate the Dave Cockrum era and a bit of the Steve Lightle era, just because those outfits were so cool. This pack was really intended to celebrate the Bronze Age Legion.”
The reasons for choosing each character are given. Garth, Imra, Rokk and Brainy were the “top four guys” and indispensable. Superboy was included to “get him out” as a figure, flight ring included (look closer!). Cham had a great exotic look and costume, while Gim was a shoo-in because a 10-inch basic figure had already been tooled up. Val was considered a must because his costume was so distinctive, while Tenz was Benecke's personal choice, as he felt fans loved off-the-wall characters. Jo had a neat costume, Brin was considered a vital part of the 70s Legion, while Wildfire's faceplate was different and interesting. Proty and the “invisible” Lyle were included to imbue a sense of fun into the 12-pack. 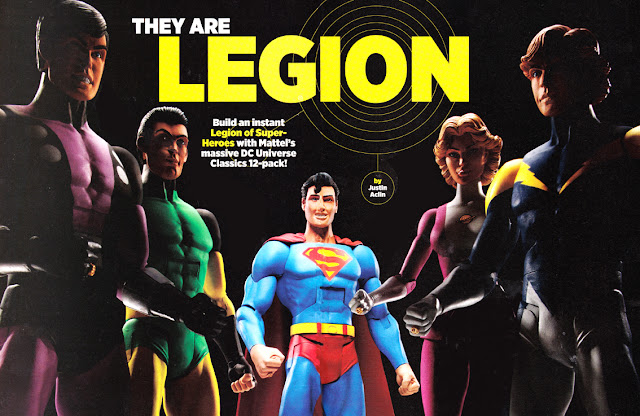 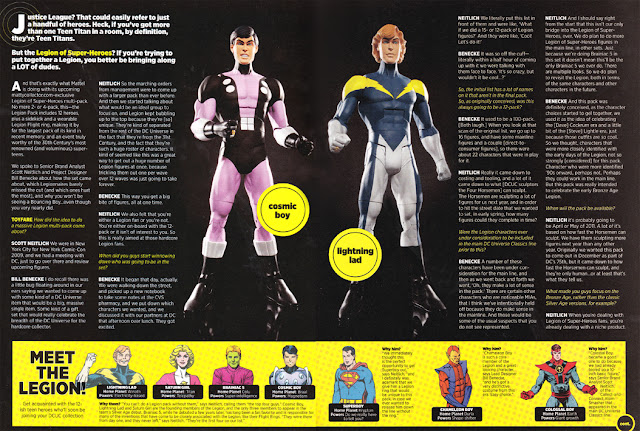 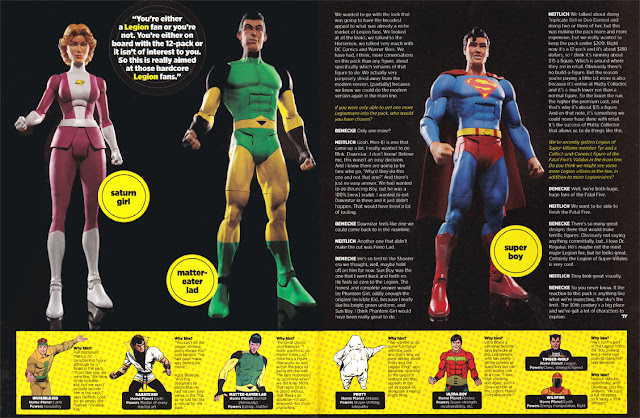 But what if they could have added more members?
Neitlich: “Mon-El is one that came up a lot … I really wanted to do Dawnstar, Blok .. I don't know! We had wanted to do Bouncing Boy but he would have been a 100% new sculpt. I wanted Dawnstar in there but that would have been a lot of tooling.”
Benecke: “Another one that didn't make the cut was Ferro Lad. He's so tied in to the Shooter era that we thought, hold off on him for now. Sun Boy was the one I went back and forth on. The honest answer would be Phantom Girl, the original Invisible Kid and Sun Boy.”
Neitlich: “We thought about doing Triplicate Girl or duo Damsel and doing two or three of her, but was making the pack more and more expensive. We wanted to keep the pack under $200.”
Benecke: “If the reaction to this pack is anything like what we're expecting, the sky's the limit. We've got a lot of characters to explore.”
Indeed. It would be interesting to interview the pair again. The pack eventually retailed for $180. Despite it being a complete sellout and a second batch made, there has never been a follow-up pack consisting of other Legionnaires. 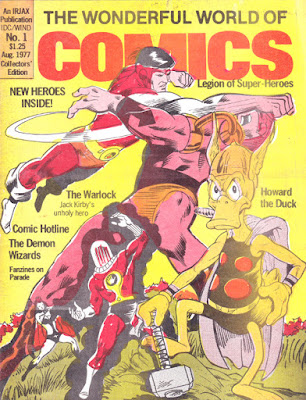 WONDERFUL WORLD OF COMICS 1 (1977)
While intended as an ongoing magazine, this title only lasted one issue, but it featured the Legion as its cover subject. The article was basically a rundown of the Legion's history, and interestingly singled out what it felt were the weakest members: apart from Chuck and Tenz, the list included Cham, Val, Rokk, Ayla and Thom.

This odd one-shot was from a company named Irjax, a comic book distributor and boutique publisher active in the early 1980s during the growth of the direct market. 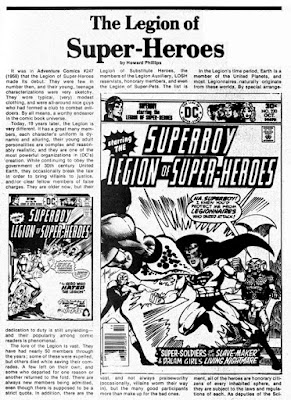 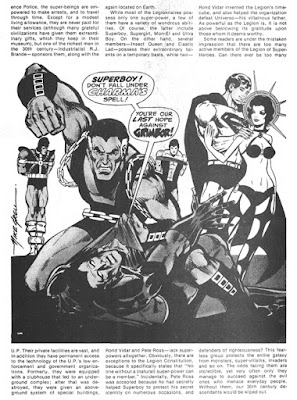 After the distribution arm of the company went out of business in 1982, its processing centers and warehouses formed the basis for Diamond Comics Distributors. The company also published under the name New Media Publishing, with its most well-known product being Comics Feature.