To round off our look at the various publications that featured articles about the Legion, we feature WIZARD magazine, the high-end product that emerged during the comic speculator boom in 1991. At its prime, with its glossy pages and focus on all aspects of the industry, including independent publishers, trading cards, toys, games, and market information, the magazine and its subsidiaries enjoyed monthly circulation of more than 100,000 copies.
By 2011, with the onset of Internet comic book sites that offered the same sort of content for free, the magazine's subscriber base was so low that it had no option but to cease publication. 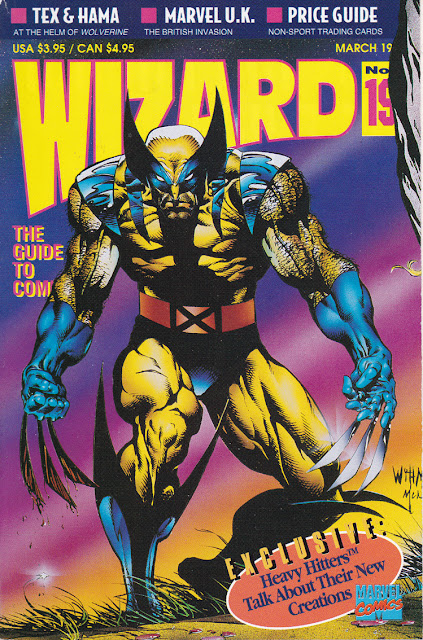 The first major inclusion of anything Legion-related in the magazine did not involve any ground-breaking expose on the group. But coincidentally, Legion characters appeared in two different spots.
The first was a depiction of Valor by Bart Sears, in an article in which he clarified his artistic techniques for drawing his brutes and babes.
The second was an advertising page for the new LEGIONNAIRES book that was coming out soon. 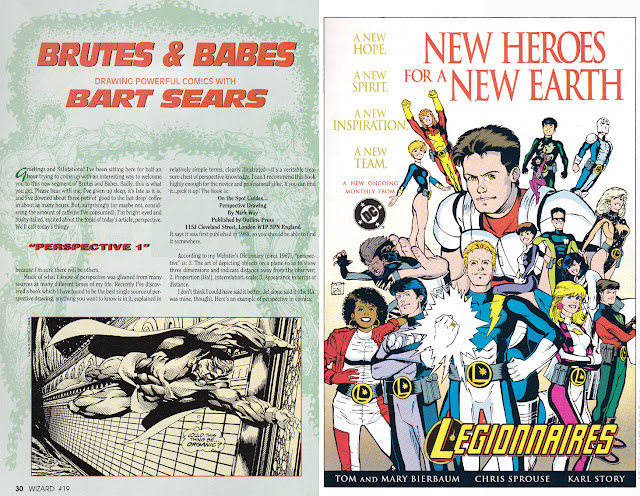 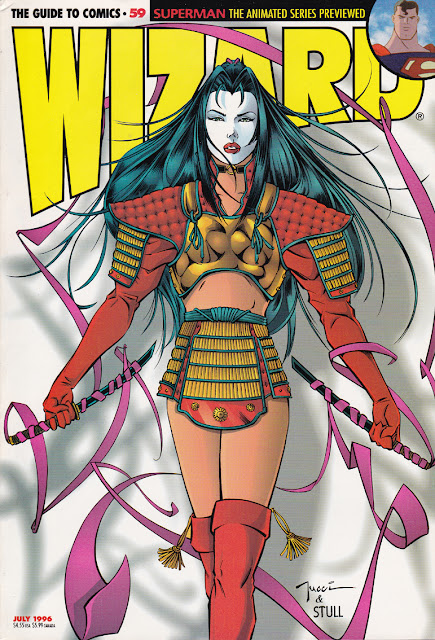 It's 1996. The magazine's top writers include Peter David, Neil Gaiman, Kurt Busiek and Garth Ennis, while grabbing the best artist spotlight are the likes of Todd McFarlane, Jim Lee, Bill Tucci, Joe Quesada and practically anyone associated with Image Comics.
And finally, a Legion issue gets coverage. LEGION OF SUPER-HEROES #83, featuring the first part of the Emerald Eye saga, is previewed along with an interview with scripter Tom Peyer, in which he foreshadows a “terrible” fate for a Legionnaire.
“This character has been around for decades”, Tom says. “And as far as I'm concerned, he will never be back.” Who was it? Can you remember? :) 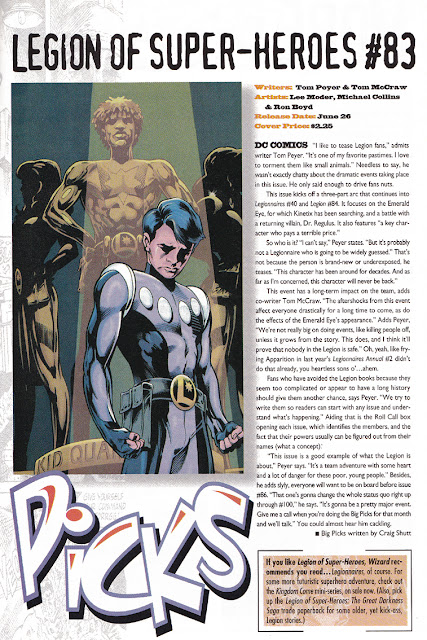 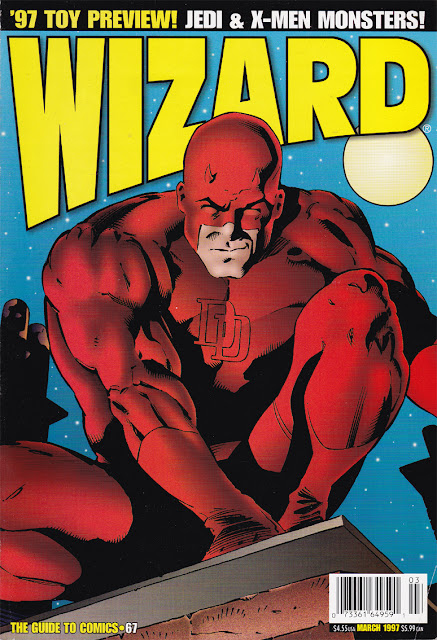 The Legion is the focus of this issue's Casting Call segment, in which writers suggest actors who could play the parts of various super-heroes if they appeared in movies.
It's a testament to the vagaries of time that only a handful of the actors are remembered today, when they were all probably hot property back then, 20 years ago. The most famous is Leonardo diCaprio, when he was but a fresh-faced teenager, who the magazine felt would make a good Live Wire. They also thought a punkish Jared Leto would fill Ultra Boy's boots well. David Faustino, Bud Bundy from Married With Children, gets nominated to play Star Boy.
But apart from those, one struggles to remember the others. Claire Danes? Marne Paterson? Brad Renfro? Chris Demetral? Douglas Emerson?
It's a lesson to be learned, Chris Wood. Mon-El today, gone tomorrow. 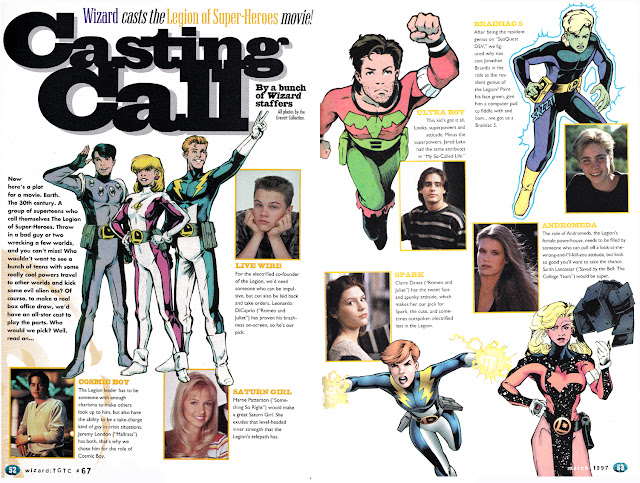 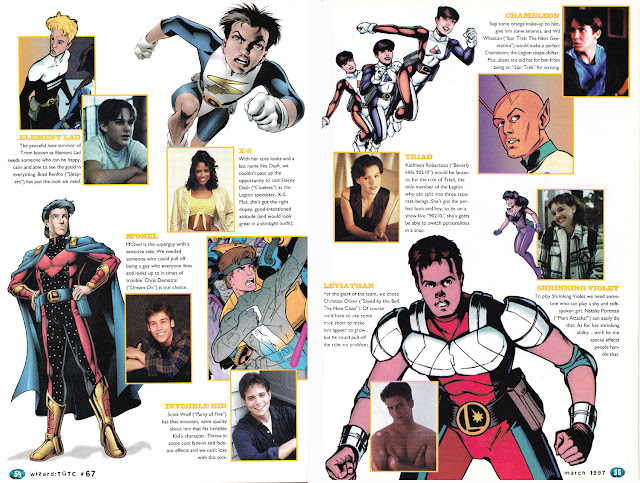 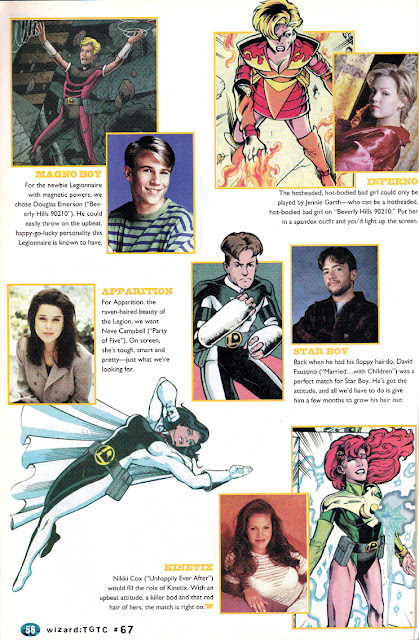 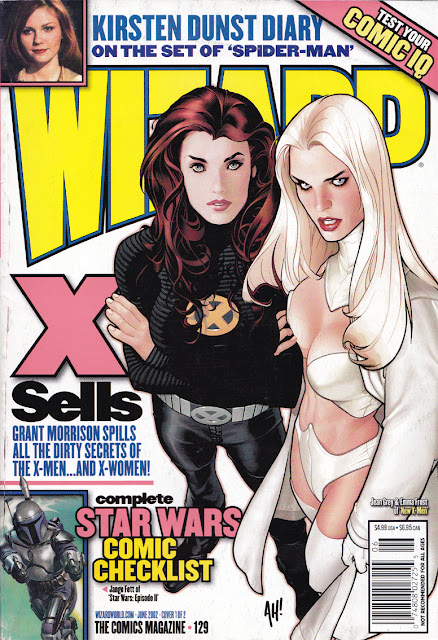 Like the comic book, the Legion didn't appear in the magazine until five years later. By this time, it was early in the new century. The second hottest book of the month was a titled called Alias published by Max. The top writer was deemed to be Kevin Smith, and the top artist Michael Turner.
But also turning heads was the revamped LEGION title, following on from the trials of LEGION LOST, during which the group lost Monstress, Element Lad and Live Wire (in a fashion). The book was written by the team of Dan Abnett and Andy Lanning, and drawn by Oliver Coipel. It was the time of Kid Quantum as leader, the Progeny, the Credo, the establishment of Legion World, the vessel named the Bouncing Boy, and the return of Ra's Al Ghul.
The series was sufficiently well-received for WIZARD to recognize it as its Book of the Month, and rightly so. It accompanied the feature with a list (the mag was all about lists) of the top 5 shocks that DnA had delivered so far. 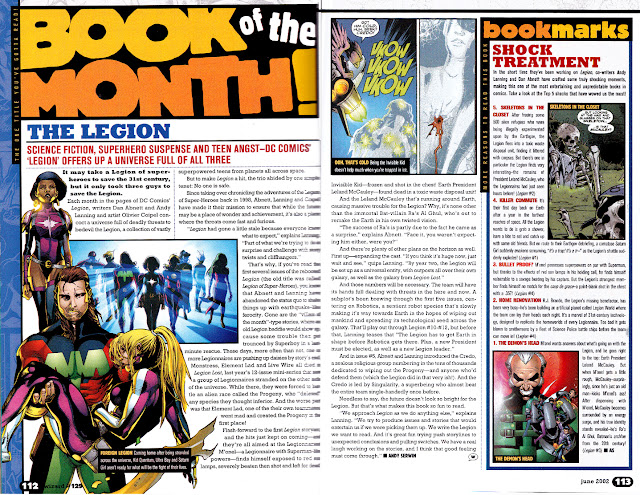 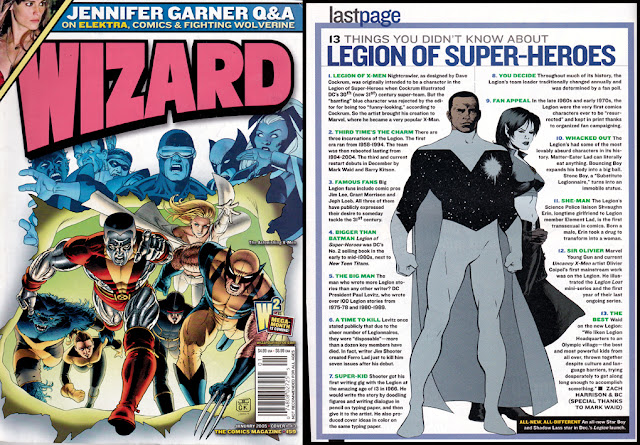 With the launch of the Threeboot, the magazine features an article on facts about the Legion. Shvaughn Erin is singled out as the first transexual in comics. 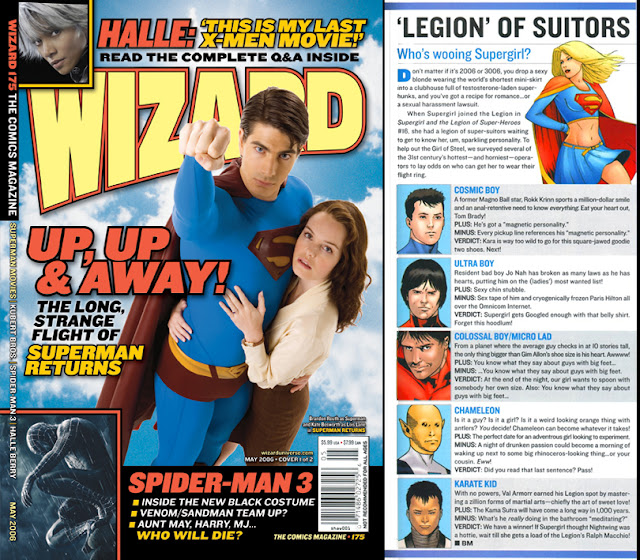 More on the Threeboot! The issue includes a light-hearted article investigating which Legionnaire would try and woo Supergirl. 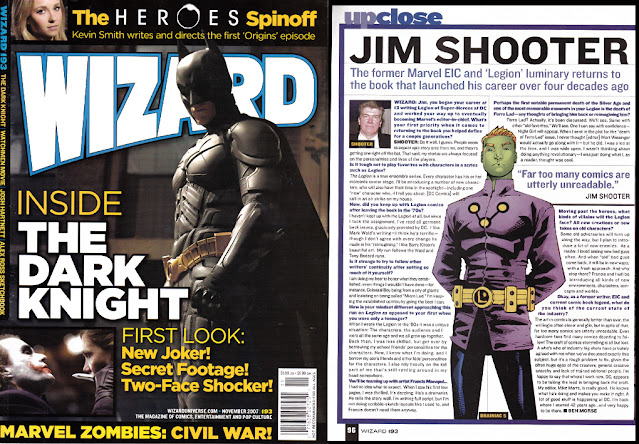 Includes an interview with Jim Shooter about his return to the writing chores of the Legion. He claims the return of Ferro Lad "was discussed".  Little did Jim know what was lying ahead. 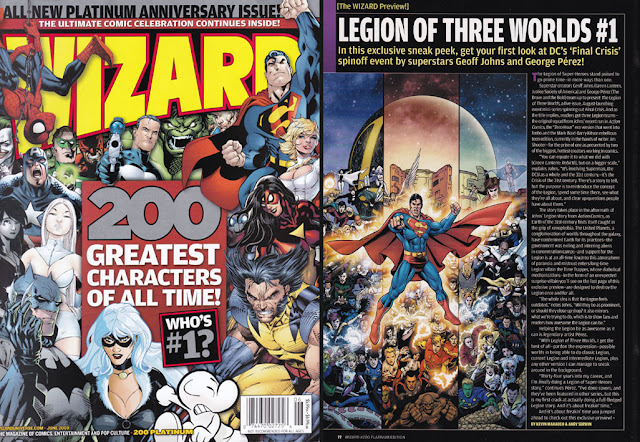 This issue previews LEGION OF THREE WORLDS. Also, in the list of 200 greatest characters of all time, the only Legionnaire to feature is Timber Wolf. Go figure. 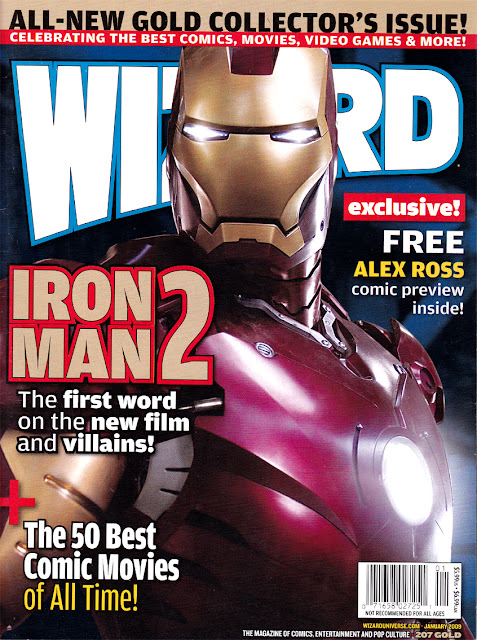 2009 was a tumultuous time for the Legion. And for many long-time fans such this writer, an exciting promise of things to come.
The threeboot, scripted by Jim Shooter, was ended abruptly, well before the writer could establish the conclusion to his story arc that he'd crafted so painstakingly the year before.The events that led up to the enforced cancellation have been well-documented, but it was likely DC Comics simply wanted to bring in the rejuvenated Legion that Geoff Johns had so brilliantly revived in his run of ACTION issues.
This issue of WIZARD reported on the demise of the Legion's book, but included a promise from Johns that the title was in good hands, hinting at a regular series based on the pre-reboot version of the Legion. Johns was also asked for his views on possible artists for the book, which included Jim Lee, George Perez, Ivan Reis and Patrick Gleason. Perez eventually drew the LEGION OF THREE WORLDS series that served to amalgamate various incarnations of the group into the version that kicked off the new regular series. And as fans know, the team which kicked that off was the impeccable pairing of Paul Levitz and Yildiray Cinar. 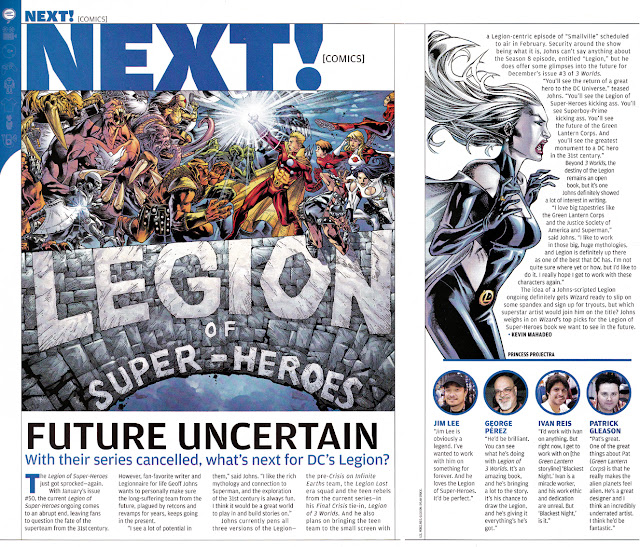 Johns' run in ACTION was also recognized in this issue, with the book being named the Best Book for 2008, quite an accolade indeed. It cited such landmark moments as the return of the original Legion, the clever use of the Substitute Heroes, Superman's battle against an enhanced Brainiac, and the start of the New Krypton storyline, which would incorporate the contribution of several Legionnaires. 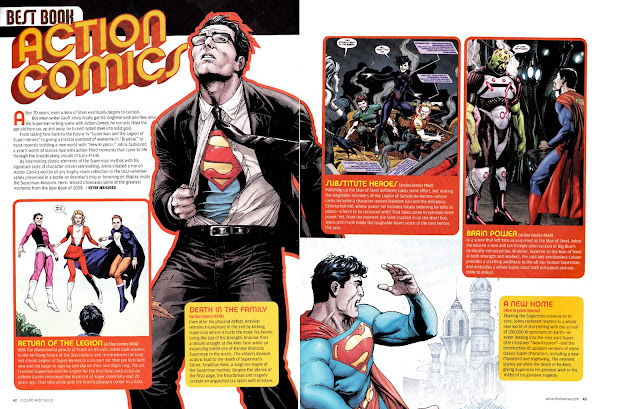 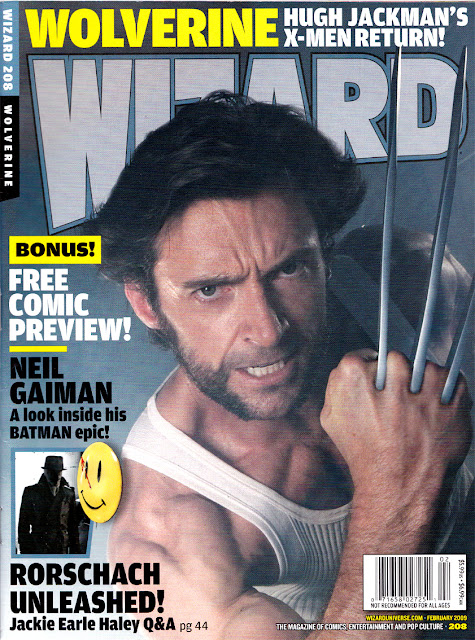 Geoff Johns had his hand into every Legion-related enterprise DC Comics was involved in … from LEGION OF THREE WORLDS, the Lightning Saga, the New Krypton arc, up to the small screen. SMALLVILLE was in its second season, with the Legion's three founders making an appearance on the show, in an episode written by Johns, which he said incorporated elements of his storylines from ACTION and LEGION OF THREE WORLDS.
In WIZARD's interview with Johns, he says: “If you're a real Legion nut, you'll see far more there than anybody else will. They mention Polar Boy's home planet Tharr. There's more fanboy stuff in there than in any other episode of Smallville.” I think I'll have to go watch that again to catch all the references.
What's obvious from Johns' comments from this issue and the one before is his absolute love for the Legion. With the group absent from the limelight for so long, it's every fan's dream that Johns, who of course is still a person of influence at DC, will be able to ensure that the Legion is given the treatment it deserves when it finally gets its own book again. 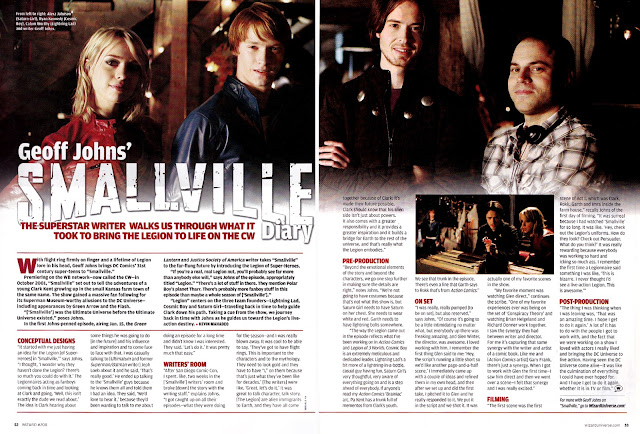 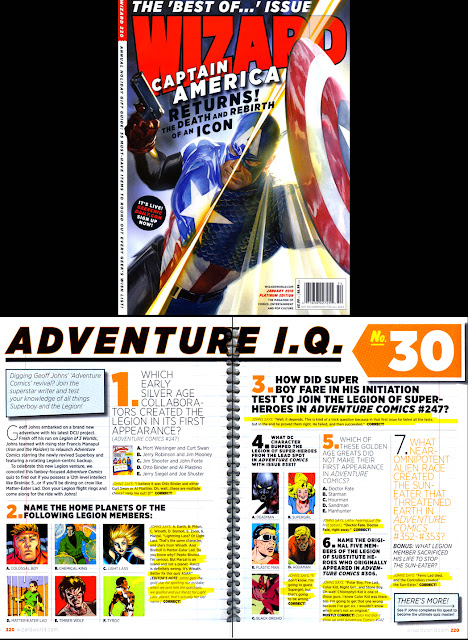 Geoff Johns is quizzed on his knowledge of the Legion, and impressively gets most of the answers correct. 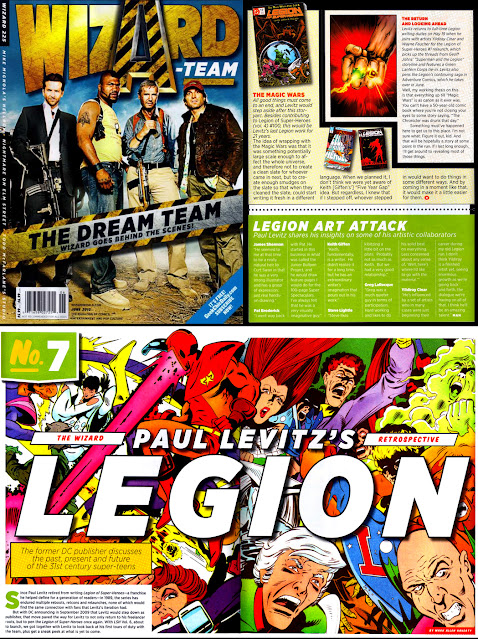 In its 20-year history, WIZARD could not entice Paul Levitz to be interviewed. Finally, in 2010, one year before the magazine folded, Paul relented, and talks over his history with the Legion in a lengthy article.
And THAT ends up our look at the various comic magazine articles about the Legion, which has spanned the past few months. If you know of any we've missed, let us know!